Anytime someone asks me for an anime recommendation, my go-to is usually Tokyo Ghoul. It appeals to men and women because it’s a unique mix of drama and action with an unpredictable plot.

The visuals are stunning, and you’re allowed to relate to the flesh-eating ghouls that live amongst mankind.

Tokyo Ghoul is centered around Ken Kaneki, a first-year college student who wants to take a girl he likes on a date. His best friend, Hideyoshi, makes fun of Kaneki in the first episode for wanting to take the girl to a bookstore.

Already we feel an attachment to Kaneki. He’s shy, loves books, has only one friend, and really wants a girlfriend. 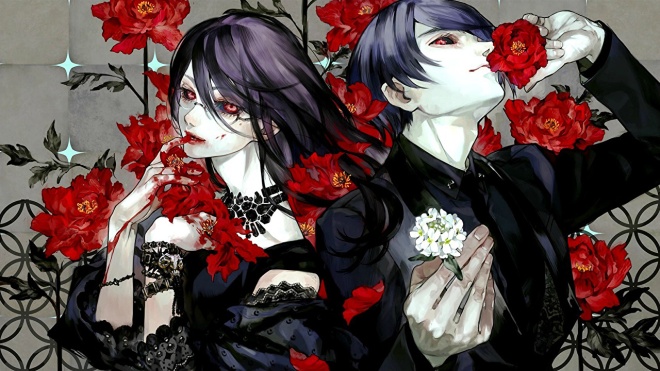 Kaneki takes the girl on a date, and she asks him to walk her home because she’s afraid of all the recent ghoul attacks.

But this girl, isn’t what she seems.

Mid-conversation, she starts eating Kaneki. I mean tearing out his intestines – did I mention the show is pretty gory?

She taunts him, teases him about the fact that she’s going to eat him, and he can’t do anything about it. Her name is Rize and she’s what the Commission of Counter Ghoul (CCG) call a “binge-eater.”

When Kaneki awakes, he’s told by doctors that he needed an organ transplant. It takes a minute, but once he realizes he can’t eat human food – Kaneki knows that since the doctor’s used a ghoul’s organs for his transplant.

The main character continues to pull on our heartstrings throughout the show. He finds a new home at Anteiku, a coffee shop run by a man who helps ghouls who can’t fend for themselves – and that includes Kaneki.

He falls in love with a waitress there, Toka, and she takes him under her wing.

As a new ghoul, he’s terrified to kill and eat humans, which leaves him fairly weak and defenseless. He’s got some incredible healing powers but refuses to really use his full strength.

We see Kaneki as a kind character who wants to protect the people he cares about, but he’s now in a world that could easily eat him alive.

I mean several characters literally try to eat him alive.

We watch him try his best to defend the new ghouls in his life, and we start to take a more sympathetic eye to the ghouls than the ones who chase them.

The CCG see the ghouls as blood-thirsty savages who go around killing and eating as many humans as they can get their hands on. And many of them are like this, but in Kaneki’s world, we see a slew of kind-hearted ghouls who merely want to live normal lives.

We watch as the CCG slaughters innocent ghouls, and we realize that the group thought to be evil, isn’t actually evil at all.

Ghouls are constantly on the run and fear for their lives because of how insane the CCG is. Kaneki ends up getting captured in the second season by a Ghoul Investigator called Jason.

Jason sets up shop and tortures Kaneki for hours.

His friends risk their lives to search for him, but the damage is done – Kaneki taps into the demon inside him, he speaks to Rize, and finally kills and eats Jason.

This was one of my absolute favorite parts of the series. We get to see just how strong Kaneki really is. He redeems himself at this point for me, because there were so many times where he couldn’t defend himself and it really annoyed me.

But then we see a change in Kaneki, he becomes crazy and mad with power. He grows stronger with every ghoul he eats and becomes almost unrecognizable.

The series makes the bad guys into the good guys and shows the Ghoul Investigators as the real monsters.

Tokyo Ghoul shows us that good and evil are not so easily defined. There’s a blurred line there and Kaneki continues to cross it.