Adventure Time: Boys Will Be Boys

Another imaginative classic from Cartoon Network, Adventure Time speaks to a new generation of boys in a way no other show has.

Finn the Human and Jake the Dog are your typical bros in a sense. They’re always hunting for new adventures, they’re deathly loyal to each other, and they are determined to save the day.

But there’s a new take on this bro-havior.

They are both super emotional and aren’t afraid to be. The show isn’t just about fart jokes and action, it tackles themes like love, loss, friendship, and the battles we struggle with as individuals.

Friends to the Bitter End

In Season 2, Jake has a hard time saving Finn from becoming a crystal solider because he’s dealing with some internal rage. He sees his father telling him that he’s going to hurt everyone, so Jake tries approaching the situation from a very calm perspective.

When the other crystal soldiers start to laugh, Finn sticks up for him saying, “Don’t laugh at him. He’s going through some things.”

They understand and support each other and aren’t afraid to be vulnerable. It’s a new take on masculinity that makes the uniqueness of the show that much more appealing.

The friendship between Finn and Jake is one of the series’ focal points, and I think it’s because the show wants us to see a healthy friendship. They take risks for each other and are determined to provide for one another.

And when one ends up taking advantage of the other, it becomes clear. In one episode, Finn uses Jake too much. He’s always expecting Jake to shape-shift for him and get him out of trouble.

Jake calls Finn out, and Fin eventually realizes that he’s been taking his best bud for granted.

In Season 2 Episode 12, Jake is worried about impressing his girlfriend, Lady’s parents, and he asks Finn to pretend to be his human butler. But when the raincorns try to eat Finn, Jake sticks up for his best bud and lets them know that he’s not for eating.

We all love LSP partly for her arrogance and inability to care about others, but she genuinely tries to help Finn and Jake, sort off. Finn ends up doing whatever it takes to save his friend. 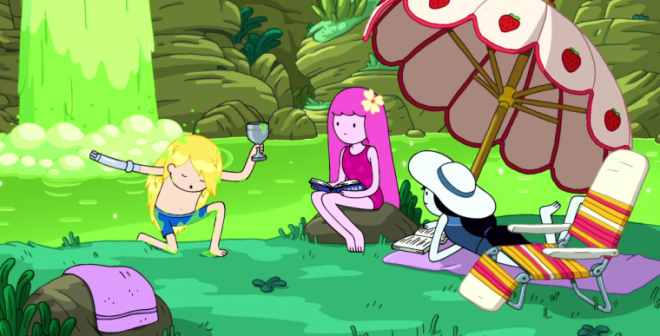 While Jake has a serious girlfriend throughout the series, Finn experiences quite a few heartbreaks including Marcalene, Princess Bubblegum, and the Flame Princess.

When Princess Bubblegum breaks Finn’s heart, Jake comes to the rescue and tries to find him a new love interest. He transforms Finn’s sad song about a hole in his heart to a fire in his heart, and wins over the Flame Princess.

We see him go through similar bad feelings with Marcalene and Jake is always there for him. It’s also interesting that even though Finn is rejected by both of them, he doesn’t get angry, and manages to stay friends.

That leads us to the Ice King.

I mean the Ice King is insane and he’s always kidnapping princesses but he’s not afraid to fess up to how he feels. He admits to being lonely, to wanting to be in love, but he also clearly doesn’t understand what love is.

When he tries to be friends with Finn and Jake, they accept him, until he starts acting crazy again.

Overall, the show talks to kids in a way they understand. The characters use slang and popular phrases that makes it hilariously relatable. It’s been around for a long time, and it’s easy to see why.