We Don’t Deserve The Amazing World of Gumball

I mean we just don’t. The characters are woke AF, and it never gets boring.

Gumball and his adopted brother/goldfish, Darwin, are admitted troublemakers who are always trying to do the right thing. They’re of the youngest generation and it’s interesting to see the kinds of characters that this generation relates to.

Okay, but what if…

There’s one episode where the kids forget to return a DVD to the store, and instead of just telling their mother they incur hundreds of dollars in late fees. They’re afraid of being rude, getting in trouble, and inconveniencing others – typical Americans.

There’s a host of unique characters from their teacher Miss Simian, who despises Gumball, to Principal Brown who often plots with Gumball, to Banana Joe and a balloon named Alan, who Gumball is jealous of.

In one episode, Gumball has a check-your-privilege battle with a cactus named Carmen after hooking himself up to the internet to become a social justice warrior.

I can’t make this stuff up.

Gumball and Darwin are sensitive, enlightened, and often hyperaware of themselves. What makes the show so good is how well the kids understand themselves and the world around them. In particular, Gumball’s younger sister Anais.

In another episode, she makes a friend, but questions it at every turn because only someone with a serious personality flaw could possibly like her.

Another time, the brothers couldn’t remember a long-time neighbor’s name, so they avoid him at all costs.

Then once they finally learn his name they get him caught by a group of gangsters that he’s been put into a witness protection program to hide from. Taking it one step further, Gumball and Darwin stage the neighbor’s death to save him from the gangsters and end up burning his house down.

Adorable Darwin, even takes over the world and threatens anyone who doesn’t follow his rules. 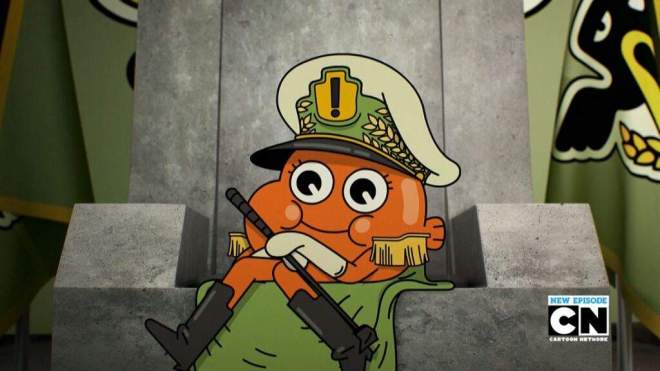 As if the amount of well-intentioned trouble that the brothers get into isn’t enough, their parents add the extra touch.

Richard, Gumball’s stay-at-home Dad tells his wife, Nicole, that he doesn’t feel appreciated enough and that he’s boycotting his responsibilities. Nicole comes home to find that without Richard watching over her precious children they’ve turned into Gremlins – literally.

Like the real Gremlins from the 1980’s feature film, and someone’s fed them after midnight.

But Richard has issues of his own.

In one episode he takes the kids back-to-school shopping and completely forgets about them over night. In another, he dresses up as an older woman, so he can fit in with a group of women who strongly resemble the cast of the Golden Girls. Then it turns out they were all just men in disguise.

Not only is the show great for kids, adults will find it relatable too.

Nicole and Richard are often being bombarded by the town for not “controlling” their kids or meeting a certain ideal of parenthood.

In a later episode Nicole has a full-on anime fight with a former martial arts rival, proving that moms can be totally bad ass. There was also the one where the family forgets some important date and they’re so afraid of Nicole that they throw her a party that could be for some happy or sad event.

And finally, my favorite episode is when Gumball and Darwin dedicate an entire day to being completely lazy. Despite it being nearly impossible to not move from the couch, they somehow manage.

The show is a delight to watch, and the imagery is a mix of real-world scenes an animation that can’t be matched.