Steven Universe: One of the Girls

What could I possibly say about Steven Universe that hasn’t already been said?

The show’s received unprecedented recognition for its exploration of queer and feminist themes, and I’m completely here for it. It’s a Cartoon Network original, the first show that was produced by a woman, Rebecca Sugar, and for me it’s long overdue.

I’m a serious fan of Cartoon Network. The network does a fabulous job of creating new worlds and unique characters with depth. I love all of the network’s original programming, and I’m particularly impressed with Steven Universe for myriad reasons.

I’d been dying for years for Cartoon Network to take their shows to the next level and deal with social issues – to write dramatic storylines, as opposed to the general comedic stretches, and they went full force.

From the very first episode, I was captivated. I knew this was something unique, something special.

The tone of the show, the colors, the mood – all of it conveyed a certain kind of longing and sadness. It somehow managed to capture that emptiness that we all feel, and it immediately pulls you in.

And also sets up you up for the show’s general weirdness. 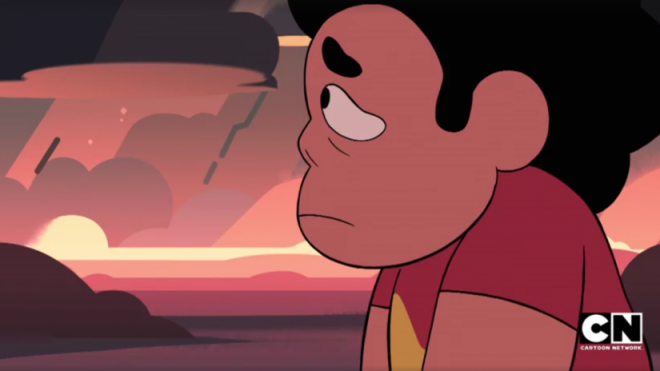 Can’t Be the Hero

For this post, I want to focus on the character Steven, rather than the Crystal Gems and I’m doing that because I feel like he gets brushed under the rug in many analyses that I’ve read. Steven in a lot of ways is extremely innocent and pure.

He’s always questioning the world around him and trying to help his friends. We see him as harmless, a good person. Someone who is humble and wants to be the best Crystal Gem he can be.

Steven is patient with the Gems as they often go on missions without him in the beginning. He’s determined to prove himself as someone worthy, and he doesn’t want to be a burden. But oftentimes, he makes swift decisions that threaten the Gems, and we don’t get the impression that he’s trying to master or advance his power.

An entire episode was dedicated to the fact that he couldn’t manage to fly, and simply had to float to the Earth’s surface.

He releases Lapis Lazuli, even though the Gems warn him that the mirror he’s using is possessed. He even kills a Gem, a friend of the Crystal gems, without consulting any of them because of the danger he senses. He continues to make his own decisions and he becomes very mistrustful of the Gems because they keep so many things from him.

The burden that he carries is a big one – an inherited gem from his mother, Rose Quartz. He lives with the Gems and not his father, which in the beginning seems as though it’s because his father’s life isn’t stable.

We see Greg Universe living out of his van, but is his home life with the Gems that much more stable?

Don’t get me wrong, I love the Crystal Gems. They’re quirky and interesting, but their personalities display a lot of toxic tendencies.

A lot of their actions remain a mystery – like the one episode where Amethyst can’t stop watching Little Butler with Greg, she turns into Rose Quartz and the audience is left wondering – was there a relationship between the two of them?

A lot of the questions that pop up, are answered later on in the series, like Pearl’s relationship with Rose Quartz, but I can’t help but see that these are signs that this is something new for the network – an experiment and they’re figuring out the best way to tackle an emotional plot-line.

In some ways it works, and in other ways it doesn’t. As I mentioned, the holes and the way they tend to overly foreshadow certain things.

As for Steven, he needs a bit more. I like seeing him outside his norm. Like when he gets upset with Pearl for not telling him everything about his mother. Overall, he is whimsical, adorable, and strong even when he shows his vulnerability. It’s a new take on a masculine character.

When he fuses with Connie, we get to see all of the internal struggles he’s dealing with, and I’d like to see more of that.